Every once in a while, you hear people complain that while printed newspapers shapen their profiles and address certain segments and target audiences, you cannot tell the difference between news websites because most of the content comes from the same wire services. It’s all the same, the argument goes. But is it really so?

The short answer is: no. As this small analysis of the agendas on five Danish news websites show, there are noteworthy differences in the priorities, selections, and presentations of news across different kinds of news websites. Using the free and highly recommendable online service Wordle, I have created word clouds of the most frequent words on the front pages this morning. I have done my best to weed out words such as “read”, “more”, “about”, “this”, and “that”; what I’m interested in is what keywords dominate the content on different kinds of news websites. This quick-and-dirty analysis is not academic work but I think it gives a quite good idea of how the agenda differs. (You can enlarge the word clouds below by clicking on them.)

The tabloid: Ekstra Bladet. This is the most popular news website in Denmark with approximately 1.5 m unique visitors each month. The tabloid newspaper has the reputation of being the “badboy” of Danish news, and in its own self-perception, Ekstra Bladet is the newspaper that dares speak truth to power. This Friday morning, however, it seemed that the badboy inclinations manifested themselves in carnal rather than anti-establishment interests as “bryster” [‘breasts’] is the most frequent word while the second most used is “Side” – as in “Side 9-pigen”, the Danish equivalent of the girls on Page Three… 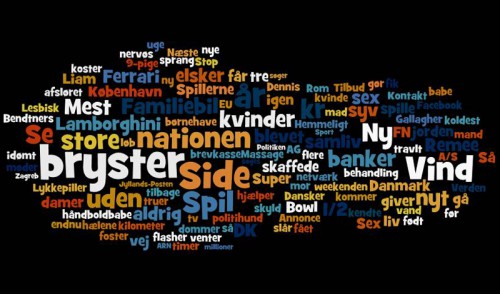 The broadsheet: Politiken. This newspaper is primarily read by people from the capital and it puts special priority on culture and lifestyle issues. This identity is reflected in “København” [‘Copenhagen’] and “kultur” [‘culture’] being two of the most frequent words, and the website doesn’t appear to have a lot of content for Danes outside the largest cities. – Note: The word “storkreds” [something like ‘big constituency’] features so prominently because numerous links to a database contained that word and I missed it when discarding noise. 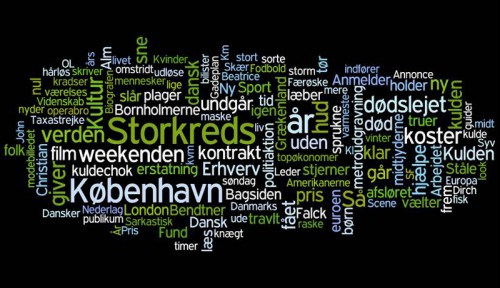 The specialist newspaper: Information. Information is the most high-brow newspaper in Denmark, and I think it’s fair to say that it’s also the most leftist in terms of political bias (except of course of the fullblooded political papers such as Arbejderen [‘The Worker’]). The social engagement and opposition to system domestication of the lifeworld is clear from the word cloud of the news website: “svage” [‘weaks’] and ACTA (the now infamous Anti-Counterfeiting Trade Agreement) are the most used key words, both implying content concerned with the fairness and political structuring of modern democracy. 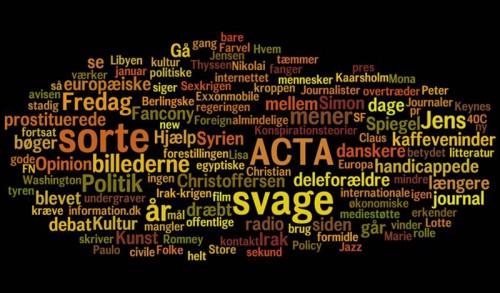 The local newspaper: Kjerteminde Avis. When the printed newspaper closed by the end of 2010 after no less than 131 years of publication, the editors and journalists continued their work on this news website. Last week, I interviewed the editor-in-chief Allan Aistrup who told me that the mission of the website is exclusively to serve the public of Kerteminde municipality (approximately 24,000 citizens) through nothing but local news; this is clearly reflected in their word cloud where “Kerteminde”, “Langeskov” (another big city in the municipality), and “kommune” [‘municipality’] are among the most frequent words. 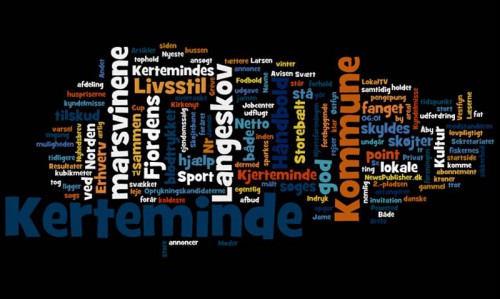 The public service broadcaster: DR Nyheder. As a public service broadcaster, DR has to serve all segments and cover all subjects – they cannot just stick to breasts or Kerteminde. It’s probably for this reason there isn’t really any patterns in the keywords of this news website which on the contrary seems to cover a large number of issues somewhat equally. The most used word, however, is “kulde” [‘cold’], and the sudden drop in Danish temperatures considered it’s no surprise that this issue is on the agenda. As such, the most interesting finding from this website is that there isn’t a clear profile to identify. 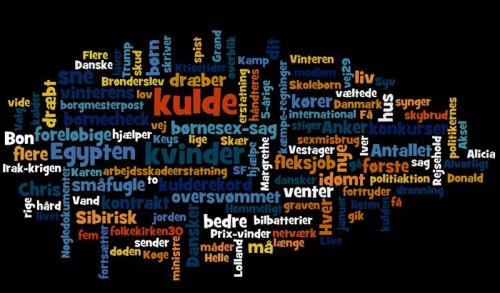 Keeping in mind the very limited empirical grounding of this analysis, we can make two observations on the basis of the word clouds. First: next time someone brushes news websites aside claiming it’s all the same rubbish, one can argue that while a part of the content is indeed rubbish (as it is in printed newspapers and on the radio and television) it’s certainly not all the same. Second: the content of news websites of course reflects their institutional backdrop and its identification of its target audience. The news websites and their selection of content are also a product of media professionals aiming at certain segments rather than the entire population.