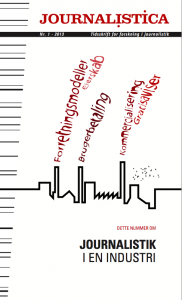 In Danish newsrooms, a saying goes that “we don’t produce a newspaper in order to make money. We make money, so that we can produce a newspaper.” The idea is to signal how publicist considerations are more important than commercial ones in a news organization, and how selling news is only a means to undertake news production.

In recent years, we have, however, witnessed a change in that perception. Newsrooms as well as journalism research have increasingly been oriented towards the economic framework of news production. It’s a shift in focus which is caused, to a large extent, by the economic crisis of the news industry – and it is also the subject of a recently published special issue of academic, peer-reviewed journal Journalistica, which I have edited. The special issue corresponds with my current research into the digital business models of the press and also ties in with a seminar I arranged back in 2012.

The headline of the special issue is “Journalism in an industry“, and the theme section consists of one introduction and five research articles:

In addition to the theme section, the issue also contains a number of articles (mostly in Danish). The journal is published open access, so all articles can be read free of charge. Enjoy.

Update January 11, 2014: Some of the research articles have resonated with people “out there”. Piet Bakker’s article received a very nice mentioning on the Nieman Journalism Lab website, while Jannie Møller Hartley’s article on hierarchies in news organizations (article not in the theme section) was discussed on the dSeneste blog (Danish).

I recently joined the editorial board of Journalistica, the Danish journal for journalism studies. One of my first actions as editor has been to suggest a theme issue of the journal about the business models of journalism – a suggestion which my fellow editors agreed upon. This theme issue will relate to some of the most important questions in current news production – most importantly, how journalism is financed, and how it will be so in the future. These are questions that was addressed on the “New business models for the news industry” seminar, which I arranged on the University of Copenhagen last November, and now this theme issue will be an interesting venue for continuing this work; and hopefully so with a broad range of fellow researchers.

Topics of interest for the theme issue include (but are not limited to):

We currently have some problems with the journal’s website, but here, you can read the full CfP (English version). Deadline for submissions is May 1, and publication is scheduled for December 2013. Contributions may be in Scandinavian languages (Danish, Norwegian, or Swedish) or English and should not exceed 35,000 keystrokes.

PS: you can get future news, calls for papers, and announcements via Journalistica’s Facebook site.